Yesterday I went to a friend’s farm to learn how to make soap.  Well, that was the intended purpose.  And we did make soap.  But we did plenty of other things.  🙂

I got there at about 8:45 a.m., just a little late for goat milking.  I love goats.  I have wanted goats for awhile.  I love milking, but I have never milked a cow.  Just a goat.  I also like goats because they are smaller.  And their milk tastes fine if you handle it properly.  So I got to milk a goat for a little bit.  Mrs. O. also had some kids, and they were very adorable.  Two were pretty young, so they are little and very soft.  Another kid is being bottle fed, so it follows Mrs. O. around like Mrs. O. is her mother.  The kid’s name is Lindy.  She is also very cute.  I stood with the goats and pet them as they all gathered around me.  The two youngest kids nibbled at my skirt.  I also went up into the hayloft.  What is so special about the hayloft?  I could see Mrs. O. and the goats down below me while I swept up the stray bits of hay.

After the milking, we went in to make soap.  First we had to find all Mrs. O.’s soap making supplies, as she had them in different places.  When we had the buckets of oil out, we ran into a minor dilemma.  One bucket of oil wasn’t labeled, and another was labeled as two different things.  We spent some time examining the oils and trying to determine what they were.  This is important, because when you make soap, you have to use a specific amount of lye for each different type of oil.  If we didn’t figure the oils out, the soap wouldn’t work.  Just as we decided which oil was which, I went back to get another bucket of the coconut oil to see what it looked like.  Thankfully I did, because it turned out that what we thought was palm kernel oil was actually coconut, and vice versa.

Making the soap was actually not hard at all.  Most of the time was spent getting the oils and lye to cool to the proper temperature.  After that it didn’t take long.  We decided to scent it peach gardenia , and color the soaps pink.  Mrs. O. cut the bars today, and said they are lovely.  I can’t wait to make more.

Once the soap was in the mold, we cleaned up, then ate lunch.  After lunch we walked down to The Church.

The Church is an old country church just down the road from their home.  It is so close, you can see it from their house.  There aren’t any services there anymore, except for a memorial service there once a year.  Mrs. O. said that there hasn’t been a regular service for about 50 years.

Around The Church is an old cemetery.  We spent some time walking around in the cemetery on the right side of The Church, where the older gravestones are.  The oldest stone that we saw was dated 1871.  There were a few that only had initials on them, and we were guessing that those could be even older.

Then we went inside.  The pews are still there, and there is a big table made out of some boards set atop some pews for when they have a potluck.  There are two old pianos up in front, and I was able to play one.  It was out of tune and the keys stuck a little, but it was still wonderful.

After we came back, we (Mrs. O., Mrs. O.’s daughter Holly, and I) went for a ride around their property.  We were looking for a calf that was born a few days ago, but we weren’t able to find it.  We got to see anther calf, though, and the goats that they have out grazing in the field, and the sheep.  I shot a few pictures.

After our ride, we made some mocha milkshakes and sat around and talked.  Soon it was time for dinner, and I went home after the evening milking. 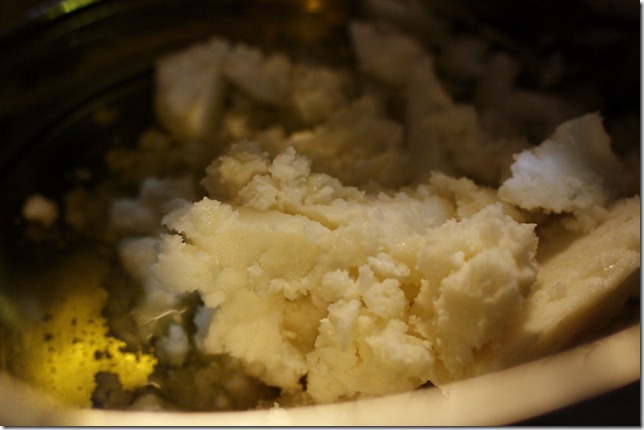 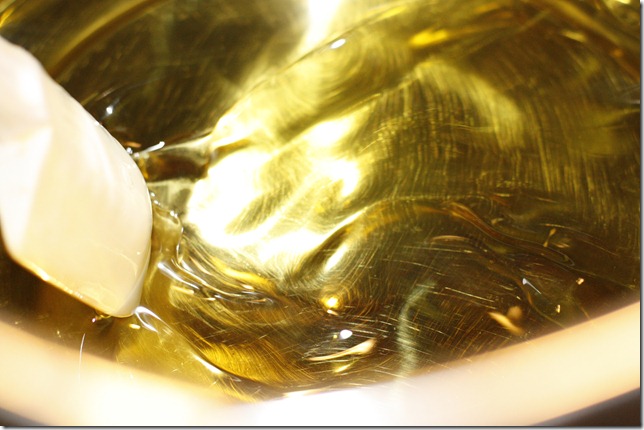 Stirring the melted oils – Those are all the soap pictures that I took.  I will post more when she gives me the soap

Going to The Church – the dogs came with us 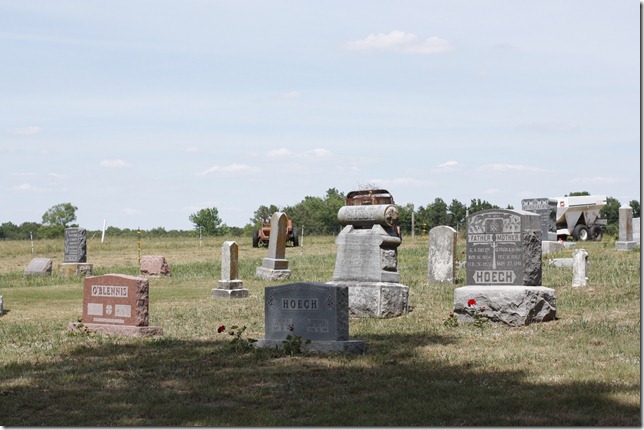 The graveyard on the left 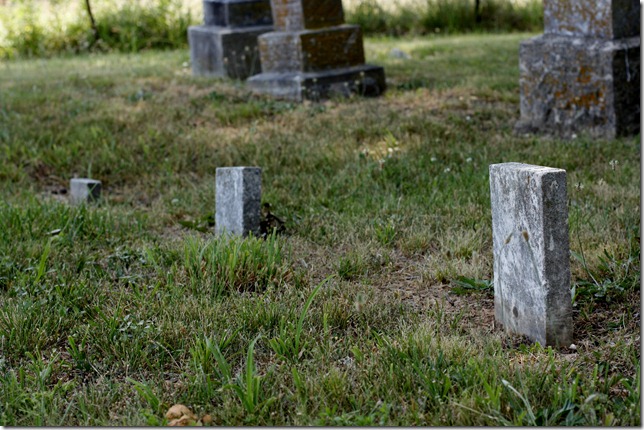 These only had initials on them 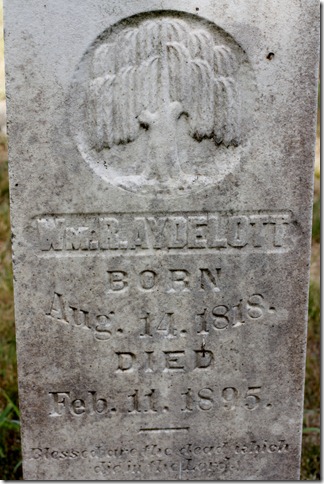 Inside The Church – the pianos are one behind the other 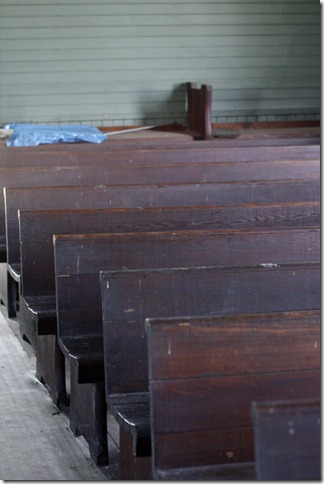 The piano I couldn’t play 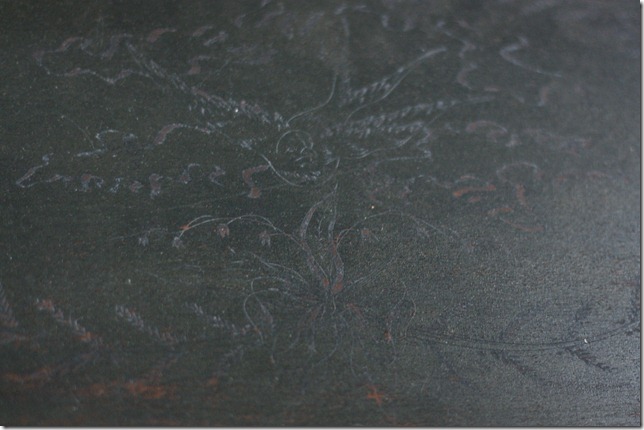 Up above, where you would usually put your music

Mrs. O. put this Bible there.  She said that she thought it needed to be there, just in case. 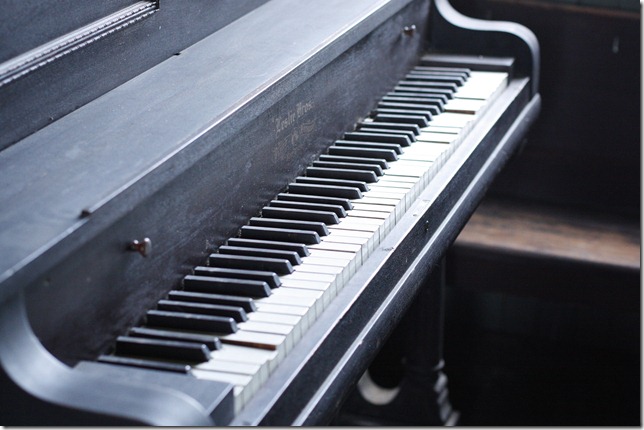 The piano I played

The ceiling – just thought you would like to see it

Walking out of The Church 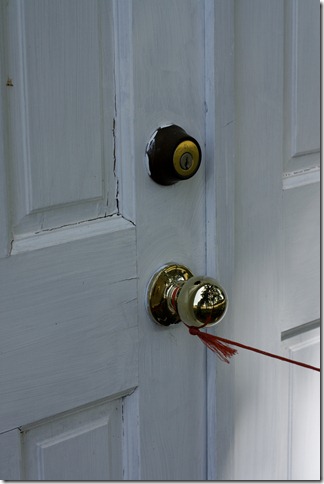 There is a board of directors that still takes care of the building.  It is kept in great shape. 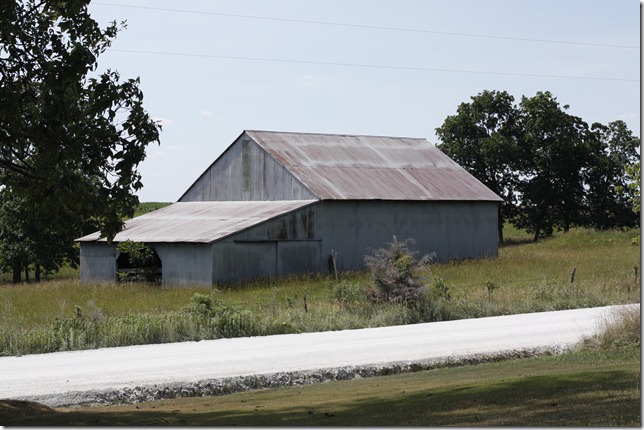 A barn across the way

You have to love those gravel roads 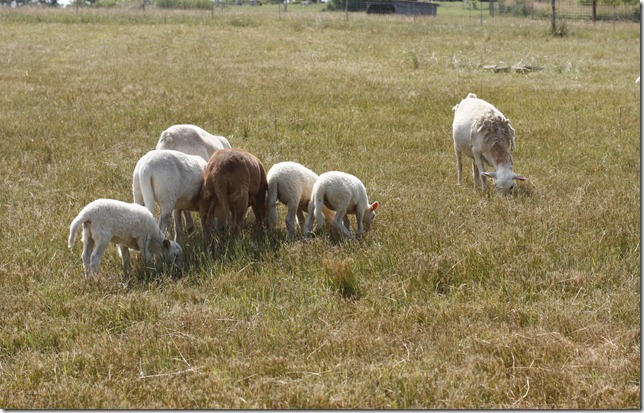 They have one tan sheep, for color

While we were leaving, the sun was setting